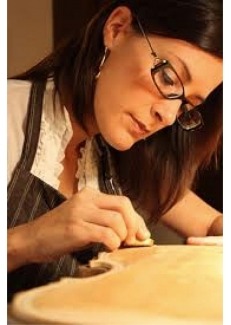 Bénédicte Friedmann was born in Rheims (France) in 1974. From an early age she showed an interest in and an aptitude for music. While attending the Conservatory she felt particularly drawn towards quartet instruments, and naturally chose to study the violin. After passing her school-leaving examinations she enrolled in the Musicology University to improve  her knowledge.

Having graduated in violin studies at the Conservatory she went on to graduate again in the viola in 1999, while at the same time studying at the Sorbonne in Paris, where she obtained an honors degree in musicology. Her thesis was on “The Quintone and the five-string Pardessus de viole”, under the supervision of Professor Nicolas Meeus.

During her studies Bénédicte developed a passion for stringed-instrument making, and it was this that prompted her to move to Italy in 1999 to attend the International School of Stringed Instrument Making (IPIALL) of Cremona. Studying under the guidance of Master Giorgio Scolari she graduated in 2002, winning the Ferraroni Prize (for the best student graduating in “Stringed-instrument making technique”) and the prize for the best thesis.

After finishing her studies, Bénédicte developed her skills and style at the workshop of Maestro Eros Barcellari in Cremona, paying special attention to the acoustic aspects of quartet instruments during the construction stage. Besides, she’s improved the art of varnish and instrument’s set-up with Master Stefano Conia “Il Giovane”.

Since 2007 she has worked independently in the historical centre of Cremona, specializing in the construction of violins, violas and cellos. In addition to taking great care over her choice of materials, Bénédicte gives special attention to the physical-acoustic aspects of her instruments, to ensure excellent sound quality.

She finds inspiration mainly in the great masters of the Cremonese school (such as Stradivarius and Guarneri del Gesù), but also more recent makers like Ornati. The famous Japanese violinist Naoto is playing her violin.

Lastly, Bénédicte has taken part in several international and national stringed-instrument making competitions, such as those of Mittenwald, Paris, and Cremona. 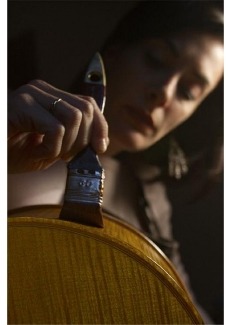 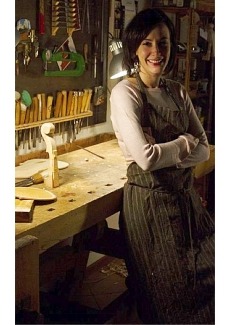 By clicking "Accept", you approve that cookies are saved on your device for the proper functioning of the website, to perform usage analytics and collaborate with marketing studies.
More information