Cremona, known by many as the "world capital of the violin", continues to maintain the tradition and technique of violin construction of the great masters who, 500 years ago, invented this instrument as we know it today: Andrea Amati (the pioneer who in XVI century gave the violin its current form), Guarneri del Gesù (who a century later made Paganini's favorite violins) and above all, Antonio Stradivari, the most virtuoso and famous luthier of all time who opened his workshop in Cremona in 1690, and came to build more than 1000 stringed instruments and received commissions from the main European courts. His violins popularly called Stradivarius are sold today for more than 5 million Euros.

The traditional Cremonés method continues today basically unchanged, although it has improved as far as sound performance is concerned.

Today this tradition is still in the hands of a good group of luthiers, who compete among themselves, as in the past, for creating the best violin, for achieving the most perfect sound, the ideal instrument that is an extension of the violinist himself and that allows him to express all his feelings naturally.

The International School of Luteria, located in an elegant palazzo of the XVI century is responsible for maintaining this tradition, teaching students from all over the world to build the instruments with the same methods, materials and tools that were used 500 years ago, to which today is added the research in acoustics and materials for further improve the performance of these instruments.

To further enhance the level of competition and demand among luthiers, the Violin Museum of Cremona organizes an international contest to reward the best works of lutheria. The winning works of this contest are acquired by the City Council of Cremona and are exhibited permanently along with treasures such as the original "Carlo IX by Andrea Amati (ca 1566) or the emblematic" IL Cremonese "by Antonio Stradivari (1715).

All this makes the Lombard city the world epicenter of stringed instruments, and where UNESCO declared in 2012 as Intangible Cultural Heritage of Humanity "the traditional construction knowledge of the Cremona violin".

The exceptional knowledge treasured by this city and its luthiers as well as the competition that is fostered among them has its fruits in the form of exceptional pieces of lutheria, acclaimed for their beauty and for their special sound, identified as unique, and recognized by the best professionals as impossible to imitate.

His master luthiers, including Conia, Grisales, Sperzaga, Bergonzi, Scolari, Roberts .. keep this tradition alive, teaching to new generations of luthiers the secrets and techniques to make instruments that inspire their creators and musicians of all corners of the world.

At Violines de Luthier we are proud to collaborate with the prestigious institution "Consorzio Liutai Antonio Stradivari, from Cremona", representing their luthiers and choosing the best instruments for our select clientele.

A visit to our store is like taking a walk through the best workshops in Cremona. Just play any of our exclusive instruments, to understand that the centennial art of Cremona is still unsurpassed and its magic continues to captivate our senses and hearts more than ever.
You may be interested
Agenda
Featured Instruments 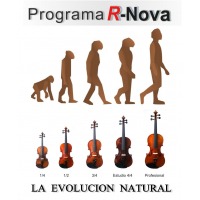 Program R-Nova
Buy your student instrument in Violines de Luthier, and when you need to change it for a bigger or higher model, deliver it as part of the payment of the new one.
Read more
Social Networks
Tweets by VdeLuthier
Request quote
Shipping National / International
Newsletter Subscribe

| Contact
Guitarras de Luthier
We use cookies to improve our services and show you advertising related to your preferences. If you go on surfing, we will consider you accept it. Aceptar